20.10.2020
How to migrate from AWS to Azure?
Monoliths vs. Microservices
Less than two decades ago, the opinion on the application structure style changed completely. Since then, such giants as Netflix, Amazon, Google, and many others have started building microservices as a new architecture style, leaving the monolithic one behind.

Imagining two mediocre companies that used different types of applications, monolithic and microservices respectively, it is crucial to understand their goals regarding applications. While the first company had a stable amount of transaction payments every month, another one noticed an increase in that number and decided to switch to the microservices model. Why?

To understand the intention of its change and why a monolithic architecture is wrongly believed to be out of date these days, let's first find out their meanings.

For instance, you have a blogging application that has features like authentication, blog posts, a database, a permission structure, a workflow approval system, and others, and each of them is in the same server. Consequently, they all communicate with the same database and use the same file system. Therefore, this type of application may include many services that are part of the same application where they all are dependent on each other. 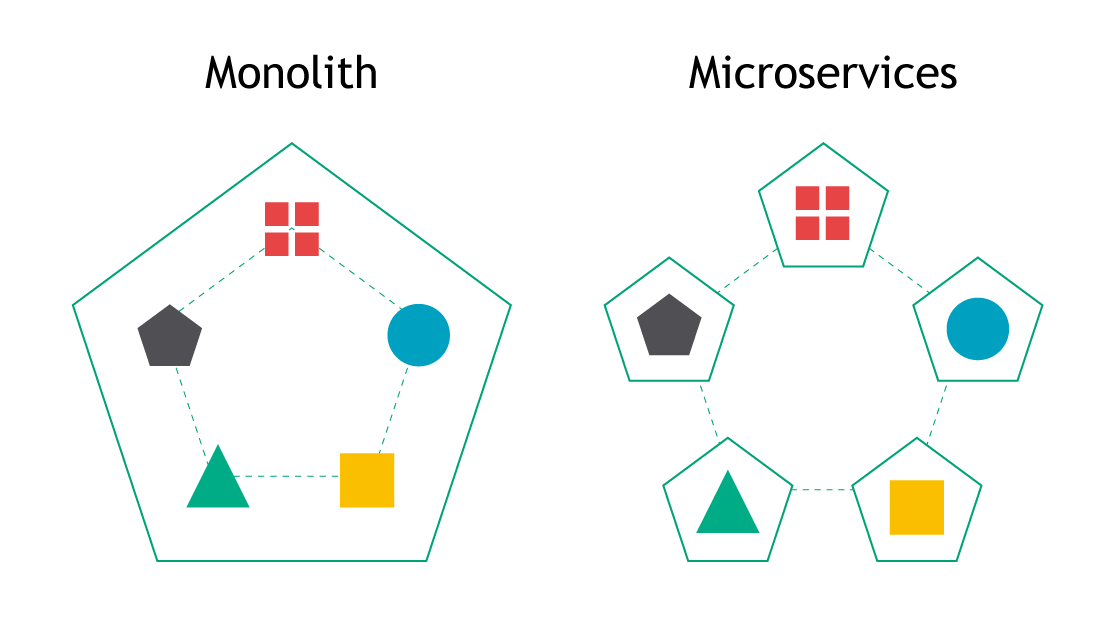 Monoliths vs. Microservices
It is an architecture where every feature has its own service. So, when one modular service is responsible for authentication, another — for a database, the other — for blog posts, and so on. The number of such modular services is unlimited, and they all work independently. Finally, they all have APIs that connect them. Therefore, each microservice may have its own database. What's the benefit? Scalability and resilience. However, it may not be the best solution for your business application. Let's find out why.

Monoliths vs. Microservices. Pros and Cons.

As it was above-mentioned, monoliths were taken over by microservices in terms of use by large corporations. However, it does not indicate that the monolithic architecture has only the drawbacks. Let's have a closer look at their fundamental features of microservices and monoliths.

The pros of Monoliths:

The cons of Monoliths:

Maintaining a monolithic application can be quite challenging, especially if it is not well-developed. Even a small change in a monolithic system is likely to lead to a number of issues related to a codebase because such applications are known to have tightly coupling processes. That is similar to the domino effect: only one change - and the entire application doesn't work.

At first sight, you may think that a microservices architecture is full of benefits, and it is the right choice for you. Nevertheless, it is not that simple.

The pros of Microservices are as follows:

Regarding the disadvantages of Microservices, they are:

Maintaining a monolithic application can be quite challenging, especially if it is not well-developed. Even a small change in a monolithic system is likely to lead to a number of issues related to a codebase because such applications are known to have tightly coupling processes. That is similar to the domino effect: only one change - and the entire application doesn't work. 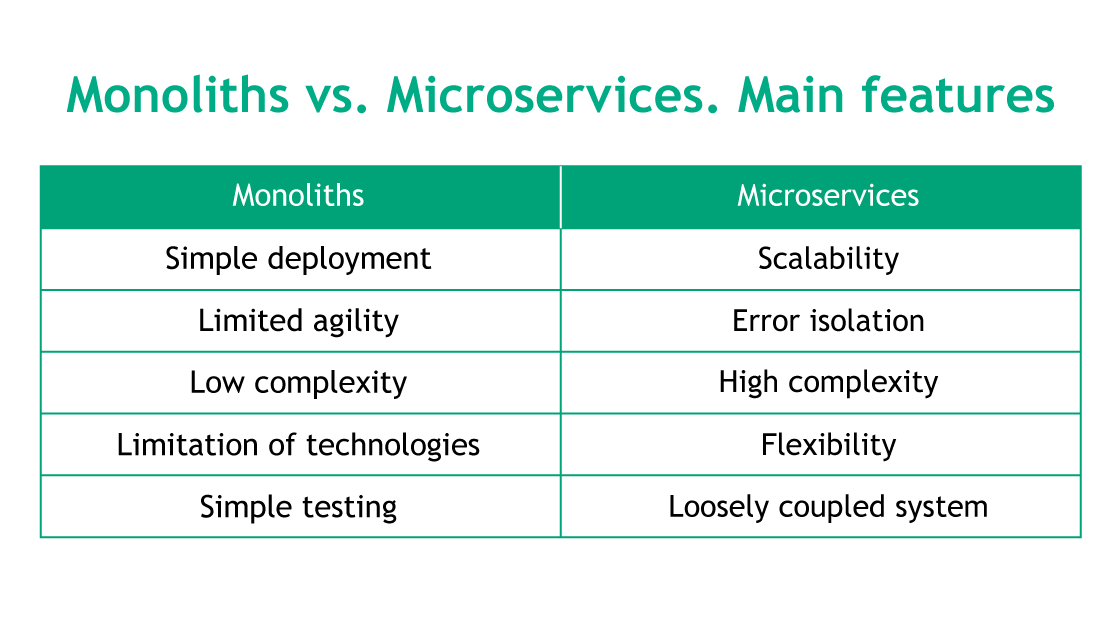 What is the difference between Microservices and Monolithic Architectures?

To have a better understanding of the difference between microservices and monolithic architectures, we will compare them in the aspects of complexity, reliability, latency, and scalability.

We already mentioned that a monolithic architecture is known for its low complexity. As for microservices, the more complex application you aim to develop, the more source codes, frameworks, and technologies you will involve in the process. The services can be located on various servers and communicate with each other via APIs.

This type of architecture implies the usage of development methodology that is completely different and does require an advanced level of coordination, skillset, and understanding of the overall architecture.

A monolith is a single unit where all the calls and processes take place in one server. That implies if a network failure happens, it will take down the entire application. On the contrary, microservices have 99.9% of reliability for the network calls. Error isolation, being among microservices features, allows you to maintain an application when any of the services fails.

Latency refers to a time break between the stimulation of a certain physical change in the system and the response to it. That mostly refers to microservices. When a microservice sends or receives data from another service, bytes are sent over a network. They turn into electrical signals and then back to bytes.

On the contrary, monoliths have no network latency as all the services are located in the same workflow. Hence, microservices are slower than monoliths in this aspect.

Benefits of Monoliths for Businesses

When we are talking about the benefits of monoliths, they are easy to understand and quick to develop. Still, the main drawback of a monolithic architecture is its inability to scale, but maybe your first application will aim at completing only one function.

When Will You Choose a Monolith Over Microservices Architecture?

You will choose a monolithic architecture for your business in a few situations.

The reason why so many businesses start switching from monoliths to microservices is that indeed a microservices architecture is able to solve problems that arise with monoliths. For instance, developers are not obliged to use the same technology for each service because microservices easily integrate with different technology.

A monolithic architecture limits you and your team in size and scope. This issue does not appear with microservices, thanks to their scalability. As all the services are horizontally and vertically scalable, it is not a challenge to improve your application with time.

In regard to the microservices, they are mostly chosen not only by settled companies like Google and Netflix. You also can decide to create a microservices application:

Winner for Your Business

As it was mentioned before, you will not only need enough knowledge but be ready for different sorts of expenses if you want to build a complex application. On the other side, a monolithic architecture is perfect for lightweight developments. 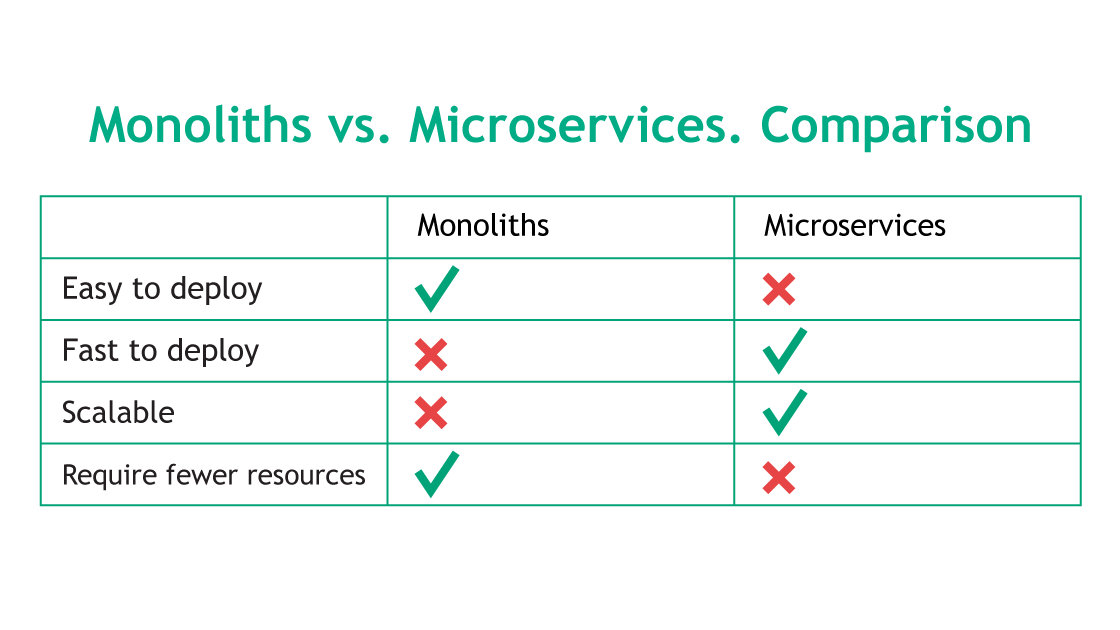 Hence, when it comes to the final decision of which type of architecture to use, you should consider:

Even though it is believed that a microservices architecture is the future of every application, monoliths are the basics. Therefore, only you are the one to decide which type will suit your business better. If you want assistance in monolith to microservices migration or consultancy on the matter, be sure to select experts that specialize in newest technologies and apply their knowledge to make sure your experience is smooth.
Comments
Get an in-depth analysis for your IT infrastructure.
Get better. Get stronger. Automate.
Apply for free DevOps consulting
© 2017-2020 All rights are reserved.
Privacy Policy

Company
About us
Blog
Case Studies
Processes
How we work
Pricing
Privacy policy
Services
Development and delivery optimization
IT infrastructure optimization
Application reliability and uptime management
24/7 support and maintenance
Contact info
Write us at:
info@opsworks.co
sales@opsworks.co
Call us at:
+38 044 360 95 64
Careers
Apply for 2 complimentary DevOps Consulting hours
Our experts will recommend how to optimize infrastructure